Thought it was time I did some more proper drawing, so here’s my favourite queen of season 7 – Max!

I love dystopian films. High on my list of favourite films are titles such as Repo Men, Never Let Me Go and Gattaca, but the number one spot is occupied by Neill Blomkamps 2009 release District 9.

Here’s a sneak peek of an illustration I’m doing of Wikus van der Merwe (played by the brilliant Sharlto Copely) in the final stages of his transformation into an alien.

Locals of Bath may have seen this poster doing the rounds – a poster for a screening of Evil Dead II hosted by horror blog Runs In Rivers. 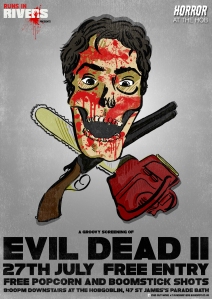 For Runs In Rivers.